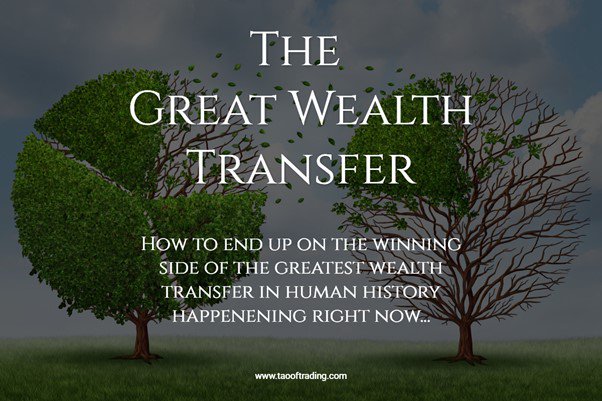 The financial world loves to talk about the most significant wealth transfer in history, where an estimated $30 trillion will be passed from the baby boomers to younger generations over the next few decades.

But I'm here to talk to you about the other significant wealth transfer that gets talked about less. The one where the rich keep getting richer while the poor get poorer, and the middle class ends up hollowed out.

Like me, you probably suspected that it's been going on for years, but the COVID-19 pandemic has made this suspicion undeniable. Since the beginning of the pandemic, income inequality has continued to rise.

The stock market shrugged off an economic collapse, historic unemployment, and more than 6 million coronavirus-related deaths globally to reach new high after new all-time high throughout the pandemic.

The most prominent companies globally, like Apple, Microsoft, and Amazon, have soared, even as hundreds of thousands of small businesses have been forced into bankruptcy. CEOs, executives, and large shareholders of the winners have profited handsomely, while mom-and-pop businesses have gone to the wall.

Anyone not aware of this wealth transfer risks getting left behind, but you can leverage the situation to grow your wealth, not lose it, if you understand what's happening.

The Rich Get Richer While the Poor Get Poorer

You might think the rich getting richer while the poor getting poorer is a bug in the system—it isn't.

It's a feature put in place by the elite few who control the system. The monetary policy governing the US dollar revolves around the idea that inflation drives economic activity.

A definition of inflation is "a persistent rise in the general level of prices related to an increase in the volume of money and resulting in the loss of value of the currency."

The inflation-benefits-the-economy theory goes like this: If consumers know their dollars will be worth less in the future, resulting in higher prices for goods and services, they are financially incentivized to spend money today.

The inflationary underpinnings of the monetary system encourage a culture of consumption. Spend today because you'll need more dollars in the future to buy the same product or service.

But does the average person do anything to protect themselves from the ravages of inflation? Apparently not.

Approximately 45% of Americans own no stocks or investment assets. Some 40% of Americans cannot even come up with $400 for an emergency payment. Sadly, these people are barely even living paycheck to paycheck.

The bottom half of the population constantly has their wealth taken from them, not by direct theft in the traditional sense, but by continually having their purchasing power eroded. Again, this structural erosion of people's wealth is a "feature" of the system, not a bug.

Inflation Hurts the Poor and Benefits the Rich

When central bankers claim that inflation drives economic growth, they forget to mention that it's the poor and middle class who foot the bill.

Sadly, the so-called 99% have the odds stacked against them. They are the most affected by inflation, which ensures they are paid less each year. Whatever savings they can make are devalued, and they consume the most inflationary goods. The system takes from those that have the least.

So why is this inflationary system encouraged if it hurts the bottom 99% of the population?

You guessed it: because it helps the 1% get richer.

There is an argument to be made that the stock market has fallen in value since its peak in 2000, and the perceived gains are primarily due to the devaluation of the US dollar.

The wealthiest people in the economy want inflation. They know that if they move their dollars into real assets, the value of these assets will rise as the value of the dollar falls.

As the economy continues to be ravaged by inflation, asset owners will benefit while wage earners will continue to get screwed. Money will end up in the hands of only a few, further exaggerating wealth redistribution and creating even more of a wealth gap.

Crisis Can Lead to Opportunity

Do you know where your money is going to end up? In the hands of the few people who know how to get rich — unless you learn how to seize the opportunities presented to you.

Crises always lead to opportunity. The Great Depression of the 1930s left one-third of Americans financially devastated, but at least seven different billion-dollar families owe their fortunes to businesses that started during that depression.

If you want to belong to a small group that will identify opportunities to become wealthier, you need to begin by building your financial education.

Invest in Your Financial Education

To seize the chance to make money in this type of environment, you need the kind of financial education not taught in schools. This type of financial training isn't mainstream—you can tell because mainstream financial advice has failed most people.

How do we know it has failed us?

According to a US Department of Commerce study, only 5% of all Americans are financially independent by age 65. Fully 75% of retirees are forced to depend on family, friends, and social security for sources of income, and 51% of retirees have an income of less than $10,000 per year.

Worst of all, according to Bankrate's Financial Security Index, most Americans say they couldn't cover a $1,000 emergency from savings. Despite the abundance of financial advice and information available today, most people are in poor financial shape.

To profit from the coming upheaval, you will need to learn tactics that go beyond the conventional. I encourage you to invest in your financial education. Read books, listen to podcasts, and attend conferences that focus on unconventional ways of accelerating your wealth potential. Only by applying strategies that go beyond the mainstream can you seize the opportunity to secure financial security for yourself and your family.

On Thursday, 28th of April I am hosting a free online master class: "How To Beat Inflation…And Close The Gap With The 1%". In this class, you will learn what you need to do to thrive in the new inflationary environment and not fall victim to the wealth transfer that is underway. To register for this free class, head over to https://www.taooftrading.com/inflation.