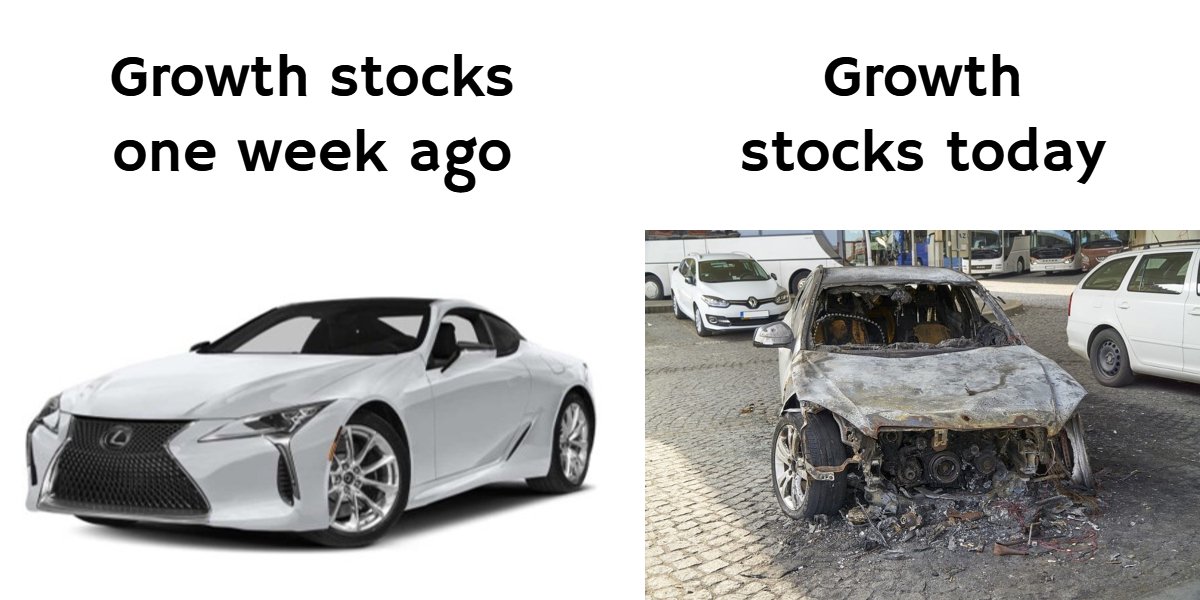 Anybody who has been watching the S&P 500 over the past week would barely have a clue why I was swearing at my computer screen on Tuesday night.

After all, the S&P 500 – and the Dow, and the NASDAQ – had all had a pretty quiet few days, right? And Tuesday was apparently no exception.

Even the VIX – Wall Street’s “Fear gauge” – has been very well-behaved the last few days, falling back to more “normal” levels…

But the still waters on the surface were masking a massive amount of turbulence beneath the surface. The greatest amount of beneath-the-surface turbulence we have seen since the stock market’s uptrend began in 2009.

What we saw on Monday and Tuesday this week was a massive decoupling of trading strategies that have been working for the better part of the last decade.

What we saw in the first two trading days of this week was high-momentum growth stocks getting CREAMED while bombed-out “value” stocks rallied like proverbial bats-out-of-hell.

What we were witnessing was a phenomenon known as “sector rotation” on a massive scale.

Sector rotation is when money leaves a particular sector or group of stocks en masse, and heads to another industry or group.

If you’re not paying attention to the details, you can completely miss what is going on. After all, following the major stock market indices gave no clue as to what was going on in individual stocks within the market. Despite furious activity within the market, the S&P 500 looked rather docile.

For the past decade, “growth” stocks have significantly outperformed “value” stocks.

Growth stocks are those that tend to trade on a high valuation multiple. Value investors consider the expensive. Relative to value stocks, growth stocks have a high PE ratio, lower near-term cash flow (and you can forget about dividends). What they promise however is massive potential for earnings growth in the future. Growth stocks offer an earnings growth profile that is secular – i.e. not dependent on the economic cycle. There is no doubt that growth stocks have been assisted by low interest rates and a flattening yield curve – both of these factors have contributed to their massive out-performance relative to value stocks. Until this week, the trajectory of growth stock share prices has been up, up, up.

Let me give you an example. One of my favourite growth stocks over the past few years has been Shopify (SHOP). Shopify helps people to monetize the internet by making it easy for people to establish online stores and shopping carts and manage online payments. Shopify had approximately 800,000 paying customers at the end of 2018 and they are looking to grow that number to 1,000,000 this year. Their growth is impressive and they operate in a very high growth market. As a leader in the industry they potentially have many years of strong growth ahead of them.

This all sounds great until you look at the fine print…Shopify doesn’t turn a profit. So an investment in Shopify requires a decent amount of belief and optimism on the part of investors.

Value stocks are a different beast from growth stocks. Value stocks tend to exist either in mature industries that don’t offer much growth (department stores come to mind) or industries that are cyclical (i.e. industries whose growth is not secular, but depends on the economic cycle). Instead of the promise of significant future growth, value stocks will typically put cash in your pocket today in the form of dividends. they also tend tobe cheap verses their fundamentals.

These so-called value stocks have been completely left behind for much of the past decade.

Momentum has been by far the most successful strategy in the stock market for the past decade. But the strategy is subject to the odd hiccup…and boy is it having one now. In fact we are witnessing the most significant crash in momentum stocks since 2009.

Many growth stocks – which have been the standout performers in the market for years, experienced very sharp reversals at the start of the week. We are talking about two day moves of -10% to -20% or more in names like SHOP, TWLO, PYPL, VRSK, MDB, CYBR, FICO, TEAM, PAYC, HUBS, FIVN, ROKU, INTU.

Conversely we have seen face-ripping rallies in names like SDRL, MNK, DDS, PRTY, RAD, SLB … and the banking sector.

We have also seen very strong performance in bonds (the ETFs TLT and IEF for example) anf gold (GLD) in recent months. In fact bonds and gold have been trading almost as if they are the same thing since June. Both asset classes have been recipients of strong “safe haven” flows and US Treasuries have received strong inflows of capital as a shield against the negative yields in Japan and especially Europe.

And the crash in momentum stocks has come just as the yield curve has steepened.

The chart below illustrates how a flattening yield curve helps “quality” (i.e profitable) stocks and “momentum” stocks. This is the environment we have seen for much of the past decade, with central bank bond purchases etc. “Value” stocks and “small-cap” stocks have struggled in this environment.

Conversely, the chart also shows how a steepening yield curve helps value and small cap stocks. Value and small-cap (and bank stocks) have enjoyed face-ripping rallies the past couple of days.

Why is this happening now?

When the “big money” sees trouble ahead, they start locking-in profits on the stocks they own that are up the most. These have typically been stocks in high growth industries like tech, software, cloud computing and cyber security.

They rotate this money into beaten-down stocks that they hope are so cheap they can’t fall too much further. Essentially the “big money” wants to lock-in profit and reduce risk in such a was as to not destroy the stock market. So far we’ve only seen a couple of days of aggressive selling in growth/momentum stocks, but the hammering they have taken potentially sends a warning signal for what could lie ahead in the market.

Remember, the goal of “big money” is to make money. If they don’t trust high growth stocks right now, we should also treat them with increased caution. Many of these stocks have made exponential moves to the upside…the same thing can happen on the downside.

The selling has been somewhat indiscriminate

The selling hasn’t been confined to the high-flying tech, e-commerce and software stocks. Take a look at McDonalds for example. That -4% move we saw in MCD on Tuesdya night was completely out of character for that stock. But it wasn’t just McDonalds. Yum Brands (YUM), Chipotle (CMG) and Starbuck’s (SBUX) all experienced uncharacteristic declines as well.

These are not sexy/techy/high-growth industry stocks, but they have been very strong performers. So it seems “big money” is literally selling whatever has gone up – and whatever they can lock-in a profit on – and buying whatever is already beaten-up.

Will this sector rotation continue?

The chart below compares the performance of the iShares US Momentum Factor ETF (MTUM) with the iShares US Value Factor ETF (VLUE). When the chart is rising, momentum is outperforming value. Note the very sharp drop we have seen this week, represented by the last red candle on the chart.

The bond market will be important in determining whether this sector rotation continues. Are the recent moves in the bond market the early stages of the bursting of a “bond bubble“? Or are the moves just a correction in a powerful trend?

It is very difficult to be definitive on this answer because we literally have no precedent for where we are today…with approximately $16 trillion in negative-yielding debt globally. But I haven’t seen anything in the headlines or the data to suggest that a reversal in the trend towards high bond prices/lower bond yields is warranted.

The chart below highlights a couple of striking observations about interest rates:

3. It’s the first time since December 1982 (37 years) that the US has had the highest policy rate in the developed world

Indeed President Trump was tweeting only last night about the need for zero-to-negative rates in the US.

There are a dozen or so economies globally that have inverted yield curves. Countries from Mexico and Canada to Germany and Switzerland to Singapore and Hong Kong are all flashing this recession warning signal (the US yield curve has just normalized). And with 14 of the G20 economies experiencing a PMI below 50, I think bond investors have every reason to be cautious on the global economic outlook.

Remember too that the trade war hasn’t been resolved, it’s just having some respite from the media cycle.

In this environment, I would be very circumspect about chasing a rally in value/small cap stocks.

In terms of the broader stock market I think caution is also warranted. We have an ECB meeting tonight and an FOMC meeting next week, so plenty to potentially excite or disappoint the market over the next few days.

It looks as though the S&P 500 will make another push to a new all-time high, but if recent history is any guide such optimism will be short-lived.

The other cautionary tale the stock market is telling us is the seeming evaporation of confidence seen with respect to recent IPOs (and even forthcoming IPOs if you include the WeWork IPO debacle). There have been a number of high profile IPOs over the past year and their performance since listing – particularly recently – has been disappointing. For example, have a look at the recent price performance of stocks such as Uber, Lyft, Zoom, Pinterest, Crowdstrike and Slack. Not much optimism here.

I will look to any push to new highs as an opportunity to put fresh hedges on. If the push to new highs is coincident with a rally in bonds and a flattening in the yield curve, IWM (the Russell 2000 Index ETF which covers mid-cap stocks) put options will be a good vehicle for this. Good trading!